A family of four have received a payout of over £4,000 after their holiday at the Club Mac Alcudia was ruined by illness.

The Thompson family had stayed at the Club Mac Alcudia in 2014 but were affected by a widespread sickness bug outbreak at the hotel which left them suffering symptoms including nausea, diarrhoea and vomiting during their stay.

The family became part of more than 50 people who chose HolidayIllnessClaims to help them pursue a claim for compensation against the tour operator Thomas Cook after sickness outbreaks at the Club Mac Alcudia. This led to the family being awarded £4,200 in a no win no fee claim.

If your holiday was ruined by an outbreak of sickness at the Club Mac Alcudia it is not too late to make a claim. As long as your stay took place in the last 3 years and was booked as part of a package, you could be entitled to receive compensation just like the Thompson family.

What happened at the Club Mac Alcudia in Majorca? 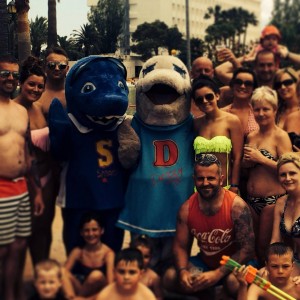 Kelly Thompson had travelled to the Club Mac Alcudia in 2014 with her husband Marc and their two children Ollie and Lacey were travelling with nine other family members and friends, including Kellys parents.

Kelly said: We were all very happy to be holidaying together as a family. Alcudia is a lovely place, however our first impression of the resort was that it was huge, also very busy and noisy.

It wasnt before long that the family noticed issues at the hotel, including the dirty and smelly lake and that they didnt see any of the staff cleaning the pool during their stay.

Kelly also noticed issues with the food, she said: The chicken burgers were always cold in the middle. Other guests at the resort warned us about this problem early on. I witnessed chicken being stored at room temperature and the same utensils being used for raw and cooked meat.

Marc was the first out of their party to fall ill, and suffered symptoms including nausea, diarrhoea and vomiting before the bug quickly spread to others in the group.

Kelly said:We all suffered stomach cramps, nausea, diarrhoea and vomiting which left us feeling lethargic. At least one person was ill each day of the holiday which had a huge impact on the rest of our large family group, as we werent able to enjoy the holiday anywhere near as much as we should have.

We believe our illness was caused by poor hygiene standards at the resort. My nine month old niece was either sick or had diarrhoea nearly every day at breakfast all over one member of our family, and later on in the day all over her pushchair.

Kelly said her mum got so sick at one point after returning home that she collapsed, and the couple had to arrange a visit from the on-call doctor when their childrens symptoms worsened.

She said: My children were violently ill when we got home which was very stressful and upsetting to witness as there was nothing I could do to stop it. We were all left feeling exhausted, lethargic and quite stressed for some time after the holiday, which angers me as a holiday should leave you feeling relaxed and refreshed!

Holiday Illness Claims helped the family make a no win no fee claim which saw them receive a combined total of £4,200 in compensation. And Kellys parents, Susan and Nicholas received £3,700 for their ordeal.

Kelly said: I am extremely happy with the service provided by Holiday Illness Claims. They are efficient, professional, honest and obviously are very good at what they do as I am more than happy with the outcome.

Whether it was by phone or email, the communication was helpful, informative, and they were very pleasant to deal with. I would highly recommend Your Holiday Claims and would not hesitate to contact them in the future.

Comments from the experienced solicitor who handled the case

When hygiene standards at a hotel start to slip, the risk of illness among guests is significantly increased.

As weve heard from Kelly, an illness outbreak can be suffered by the majority of a group travelling together, but it also means that those in a party who escape illness arent able to fully enjoy their holiday.

I would urge anyone else who has fallen ill at this resort or while on holiday abroad in the past three years to give us a call as soon as possible to discuss making a claim for compensation.

Were you affected by the sickness outbreaks at the Club Mac Alcudia?

Here at HolidayIllnessClaims, our specialist solicitors have already helped more than 50 people receive thousands of pounds in compensation after outbreaks of sickness at the Club Mac Alcudia.

Under the Package Travel Regulations 1992, your tour operator could be liable if you have suffered symptoms of illness lasting more than 7 days during a package holiday in the last 3 years.

Our dedicated solicitors have years of experience helping people receive compensation in claims against tour operators including Thomas Cook, First Choice, TUI (formerly Thomson) and others.

Or, if you’d prefer to arrange a call back with one of our experts, you can complete our online holiday illness enquiry form here.