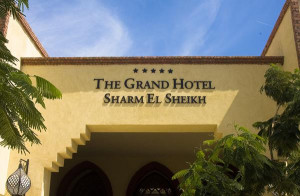 Keisha Green (21) and her partner (26) travelled to the Grand Hotel, Sharm el Sheikh in August 2014 only to have their hopes of a romantic getaway dashed by holiday illness.

Speaking to the legal experts at Holiday Illness Claims, Keisha claims that it soon became obvious that standards at the Grand Hotel were far from five-star as described. She levels a number of serious complaints against the hotel including:

The couples Egyptian escape soon went from bad to worse as Keishas partner was floored by the symptoms of gastric illness and placed onto an IV drip some mere days into their stay.

Then, on the penultimate day of their ruined holiday, Keisha herself was forced to seek medical treatment in resort as she experienced fever, gastric symptoms and developed a skin rash.

The stricken St Helens holidaymaker reports that her illness symptoms made for an uncomfortable return flight home, revealing that on the day of departure, my stomach had bloated that severely that my clothes did not fit â?¦ I was struggling to walk around the airport.

After receiving no response to her complaints, she decided to take legal action, instructing industry leaders Holiday Illness Claims on a no win no fee basis.

With travel law solicitor Sue Robinson on her side, Keisha was awarded £3,600 in a successful gastroenteritis on holiday claim.

Sue also negotiated a settlement of £3,000 for Keishas partner, creating a total compensation pay out of £6,600 for the young pair.

Commenting on the case, Sue said: I am delighted that I was able to help Keisha and her partner claim the compensation they deserve.

Unfortunately, gastroenteritis remains one of the most common causes of holiday illness, leaving those affected suffering from severe sickness and diarrhoea. I would always advise anyone who is unfortunate enough to experience such symptoms to make a record and seek medical attention if necessary.

Are you entitled to thousands?

If your package holiday was ruined by illness within the last three years, call 0800 01 54321 and speak to Sue or any one from our expert claims team to see if you too are entitled to make a claim.

Alternatively, if you dont have time to talk on the phone, you can start your claim online.